The Fourier Transform Infrared (FTIR) technology utilises Infrared Radiation (IR) to show the differing “fingerprints” of samples being analysed and hence provides insight into their chemical structures. Using this, scientist can identify if the sample is organic, inorganic or polymeric and more specifically what the sample is by comparing with existing references.

In the edible bird’s nest industry, there are many innovative ways to create fake forms of bird’s nest, alter the colour of the bird’s nests as well as create bulk in bird’s nest products such that it appears that there is a higher bird’s nest content than there really is.

The Avian Science Institute has found that the FTIR technology is a convenient and yet powerful tool that can assist in the analysis of bird’s nest samples to prove their genuineness. Comparing the sample peak pattern (from 50 times measurement) with the reference standard genuine bird’s nest peak pattern allows us to differentiate the sample as either genuine or fake bird’s nest. 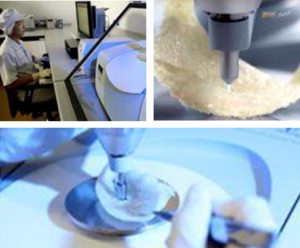 As bird’s nests are natural ingredients, FTIR values may vary from batch to batch. In the industry, the standard reference FTIR value for genuine bird’s nest is 1.0000. Any batch of sample with FTIR values above 0.9500 are deemed to be genuine.  However, the Avian Science Institute adopts more stringent quality specifications, recommending that samples should match the reference at least 97% (FTIR value of 0.97) and typically using only samples with a match of 99% (FTIR value of 0.99) and above.

The three FTIR graphs above show the analysis of three samples as compared to references. Each sample has a correlation of at least 0.99 against the reference and that means they match at least 99%. Hence all three samples can be confirmed as genuine bird’s nest.