Historically, the domestication of the avian species has been common across many different cultures primarily for its eggs, meat and feathers. These domesticated birds are also known as poultry and primarily come from the order Galliformes which include approximately 290 species, and the order Anseriformes which include approximately 160 species.1,2,3 An example of a bird from the Galliform order would be the chicken (Gallus domesticus) whilst an example of a bird from the Anseriform order would be the duck (eg. Anas platyrhynchos).

Most Galliformes have evolved and adapted to living on the ground. Some may be able to fly short distances but basically most are nonmigratory birds. Clutch size ranges between 3 to 12 eggs. Conversely, Anseriformes tend to be associated with living in freshwater or marine habitats. They are also known to fly great distances during mass migrations which typically occur when the season changes. This migratory behavior has been attributed to their internal hormonal cycle and response to climate. Clutch size for this order is more varied, ranging anywhere between 2 to 20 eggs.2,3 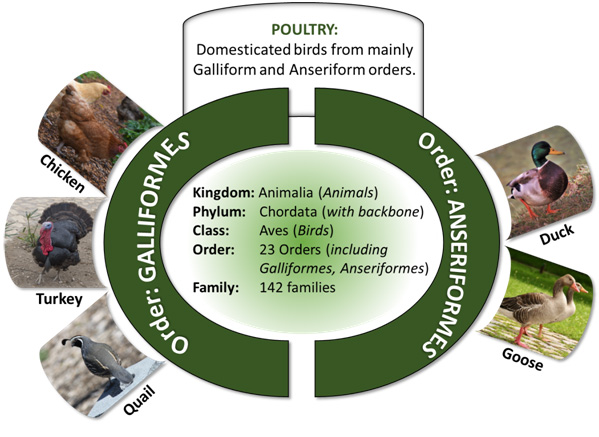 Various anatomical parts of poultry, which include many different avian species such as chicken, duck and turkey, are used as ingredients in traditional herbal tonics, meal replacements and dietary supplements. As of 2016, 91% of the world’s poultry population were chickens, 5% were ducks and the remaining 4% consisted of other species of poultry. The 91% poultry population that were chickens contributed to 89% of the entire poultry meat supply worldwide.4

With these figures in mind and the obvious fact that chickens are generally regarded as the most economic and preferred source of poultry meat, the Avian Science Institute (ASI) has been committed to exploring and identifying the bioactives that give chicken and Essence of Chicken it’s health benefits and efficacies.

The ASI team has conducted many clinical studies to better understand the mechanisms of action of the bioactives found in poultry related ingredients and products. Our extensive research on Essence of Chicken in particular has also contributed to the development of a proprietary extraction process that allows for bioactives to be drawn out and concentrated from chicken meat.

Learn More About Our Research