You have heard about it but only with superficial knowledge?

Or maybe you’re seeking for more facts to make an informed decision?

Here’s a useful summary about the Avian Influenza virus and how it could impact you!

The impact of Avian/Swine Flu on communities has been reported since the early 20th century where the H1N1 Spanish flu affected swine and birds, resulting in 40 to 50 million deaths. Other pandemics and outbreaks have also occurred in Hong Kong (H3N2), China (H5N1), Thailand and other parts of Asia (H2N2, H5N2, H5N6, H5N7, H7N9 etc), and have resulted in millions of deaths.

Since 2014, there has been a significant increase in the number of cases of Avian Influenza across all continents including Australasia, North America, Europe, Asia and Africa. In fact, data available from Office International des Epizooties (OIE) shows an estimated 3-fold increase in the number of cases reported from 2014 to 2017 (Figure 1).6 Within 2018 alone, Influenza A H5 and H7 viral strains have been detected in countries such as China, Japan, Korea, Malaysia, Cambodia, Vietnam, Bangladesh, Denmark, Germany and many more. 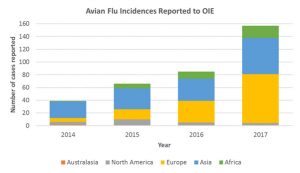 Our Contribution to Managing Avian Flu

As part of the Institute’s efforts to address the Avian Flu crisis that has periodically plagued the regions markets since the 1950s, the team has worked to incorporate guidelines established by WHO, FAO, CDC as well as Good Agricultural Practices from the various markets to develop more stringent protocols. An example is to recommend heat treating products meant for consumption at a higher temperature and for a longer time than what has been proposed by the regulatory bodies.

The Avian Science Institute has worked with businesses to develop stringent protocols and internal guidelines to minimize the risk of Avian Flu can be minimised in the supply chain. Mitigation plans have also incorporated the Good Agricultural Practices (GAP) from different regulatory bodies. Key highlights from the guidelines include: